The first agricultural projects in Poague Run began in 1998 when two cousins, Lewis and John Moore, began fencing cows out of the streams on their farms. This was the year USDA began funding livestock stream exclusion and planting native trees in the riparian zone. These projects were funded through the Conservation Reserve Program.

Lee Herford, farmer and landowner at the headwaters of Poague Run, explains the benefits of USDA funding, “The programs helped us install livestock watering stations all over the farm so now we can rotate the cows to different pastures. It allows us to better utilize the forage on our farm and protect the stream.” Rolling Hills Farm owner Carolyn Moore also participated: “I like watercress and now I have an abundance of it. I fenced the cows out of the stream, and it was amazing how fast the stream banks healed. Now the water runs so clear.”

The Headwaters Soil & Water Conservation District obtained a grant from the Virginia Department of Conservation and Recreation to help landowners correct malfunctioning septic systems. Sandy Greene was in charge of administering the grant for Headwaters and reports, “Once we advertised we had funds to help with septic problems in the watershed it didn’t take long to fix them.” The city of Staunton financially helped with sewer hookups when the houses were close to existing sewer lines. The city also installed a sewage lift station to handle more connections.

Many conservation practices have been implemented in this watershed. Landowners and farmers excluded livestock from 5.8 miles of streambanks, established 44 acres of riparian buffers, planted over 6,000 trees and shrubs, and established 25 acres of early successional habitat for Northern bobwhites and other grassland birds. Three houses were hooked up to the city of Staunton’s sewage system, and all malfunctioning septic systems were fixed by either pump-out or by installing new, reliable systems.
Restoring the watershed began in 1998 and was completed in 2014. The water in Poague Run now runs clear, clean, and cold and is supporting native brook trout populations. 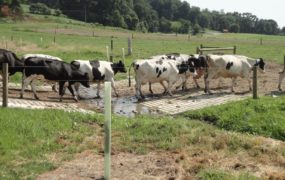